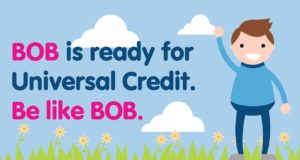 The Welsh Housing Awards recognises and celebrates the creativity, passion and innovation of housing organisations and individuals across the breadth of the sector in Wales.

The Innovation in Communications award is presented to the marketing campaign that has delivered outstanding communications in the last year, particularly focusing on planning, strategy and campaign tactics, impact of communications outcomes and effective use of budget.

‘Be like Bob’ was an integrated marketing campaign based on the concept that tenants should be like Bob because he is managing his Universal Credit payments after organising his banking, online access and budget. It encouraged tenants to take practical steps to prepare for the transition to Universal Credit as ‘full service’ has launched in our local authority areas.

Pooling resources has prevented associations from having to pay more for design and advertising and made advertising more affordable by launching initiatives jointly.